Pucker those lips…July 29th is National Lipstick Day [I’m not kidding].  But do not scoff, for this could just be what Jewish educators need: a teachable moment.

It starts with the philtrum — that little groove between your top lip and nose designed by the angels. According to Jewish tradition, while you were in utero, an angel taught you everything you needed to know. But just before birth, that angel tapped your upper lip so you wouldn’t divulge the secrets of the universe, including all the Torah you had been taught. The whole education system could have looked completely different if not for the angels meddling with your mouth. 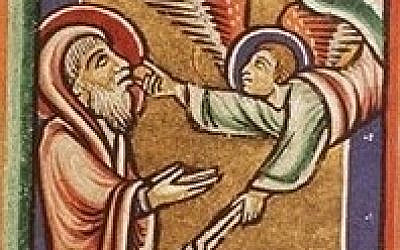 Isaiah 6:6  An angel touches his lips with burning coal from the altar, (http://europeana.eu Public Doman)

Moses, our greatest leader? Bad lips. As he said himself, “Why should Pharaoh listen to me, since I have uncircumcised lips?” Tongue-tied might be a better translation, but the point is that his lips defined him. And Hannah’s desperate prayers for a child when “only her lips moved, but her voice could not be heard?” The priest Eli mistakenly considered this a disgraceful act of drunkenness and Hannah’s mode of prayer became the model for the silent Amidah prayer: starting with the request “O Lord, open my lips, and let my mouth declare Your praise,” while the final paragraph asks God to “guard my tongue from evil and my lips from speaking deceitfully.”

Our lips are that point of contact with a holy object — if one drops a holy book, it is customary to kiss it after it’s picked up. During prayer, the tzitzit and the tefillin are kissed. Many Jews touch the mezuzah every time they pass through a door and kiss the fingers that touched it. For some, this is an expression of a religious commitment, for others it is a superstitious practice rooted in family tradition. Lifting young children aloft to kiss the mezuzah is oft repeated in the synagogue as children are encouraged to kiss the Torah scroll as it is brought through the congregation. “Is the intimacy between the lips and a holy item,” asks the teacher, “the paradigm for human relationships?” Discuss amongst yourselves.

It is thought that ancient Sumerians were the first to wear lipstick: they crushed gemstones and used them to decorate their faces, mainly on the lips and around the eyes; Cleopatra crushed bugs to create a red color on her lips. You could say that Israelites in the region were likely to be influenced by these innovations. Many other cultures have puberty rites involving the lips: aboriginal girls in Australia paint their mouths red with ochre, and in parts of Africa, girls have two bottom teeth removed and a hole is cut into their bottom lip so that a lip plate, a sign of fertility, can be inserted. What do your students think of that?

Lips feature in the culture wars: 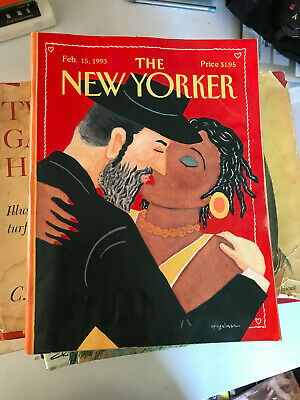 Next Valentine’s Day marks 30 years since Art Spiegelman’s scandalous front cover of the New Yorker depicting a Chassid kissing a young black woman. He explained his work as a “wish for the reconciliation of seemingly unbridgeable differences in the form of a symbolic kiss.” The Unhate campaign by the United Colors of Benetton shared unlikely pairs of world leaders locking lips in the spirit of love. One advertisement showed Pope Benedict XVI kissing Sheik Ahmed al-Tayeb, but after the Vatican’s condemnation, it was hurriedly withdrawn.

Lipstick is dignity: There are poignant reminders of women trying to maintain remnants of their former life as they held onto their lipstick cases during the Holocaust. The United States Holocaust Memorial Museum has the metal lipstick tube belonging to 21 year old Masha Wolpe that she kept in a handmade, burlap pouch while a prisoner at Stutthof concentration camp from July 1944 to April 1945 and the lipstick case carried by Irena Ehrlich vel Sluszny when she walked from Berlin to Warsaw in 1945, in search of her family.

Lipstick is warfare: Apparently Winston Churchill recognized that psychological power of lipstick and made sure it was not rationed during World War II. Shades called Auxiliary Red, Victory Red and Home Front Ammunition reframed lipstick as patriotic rather than risqué.  During the Cold War, KGB operatives used the lipstick pistol, small enough to avoid detection but powerful enough to deliver the ultimate kiss of death.

Lipstick is freedom: Elizabeth Arden first provided red lipstick for women marching down New York’s Fifth Avenue for the vote in 1912. It became a symbol of power and emancipation. According to Rachel Felder, the author of Red Lipstick: An Ode to a Beauty Icon, it has been proven scientifically that when you wear red lipstick, you are more attractive to people’s gaze, either a sexual gaze, or an “I’m paying attention” gaze. The suffrage movement made everyone pay attention.

Lipstick is business: Geurlain, best known for its perfumes, produced the first commercial lipstick in 1884 using deer tallow, castor oil and beeswax. In 1994, the company was bought by the Moët Hennessy Louis Vuitton [LVMH] conglomerate for, let’s say, more than a pound of chopped liver. Jews have been peddling lipstick for years: among them are Helena Rubinstein, Estee Lauder, and the Revson brothers, who are all well known for their eponymous cosmetics and also for channelling profits into Jewish philanthropy. The lipstick market size was valued at $8.2 billion in 2018 and is estimated to rise to $12.5 billion by 2026. How much lipstick can one woman buy? Apparently, she spends $1,780 in her lifetime.

You want to know what I think of the commodification of women?

My lips are sealed.